← back to
DVL Recordings
Get fresh music recommendations delivered to your inbox every Friday.

from Comes With The Fall 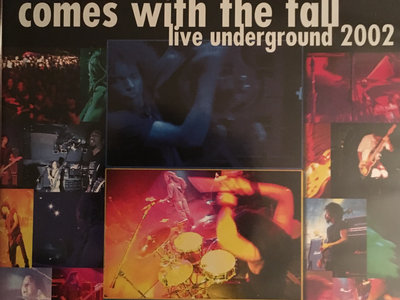 Released in early 2003, "Live Underground 2002" is a vivid snapshot of Comes With The Fall on tour - a hardworking independent band carving a path on their own terms. Featuring electrifying full-length performances, interviews with the band and their fans, offstage shenanigans, and some really cool bonus extras (including a very special hidden gem that is worth the hunt), this rare film captures a unique moment in time, both in the life of the band and the rapidly-shifting music industry (to which CWTF always refused to kowtow). Beautifully shot by director Steve Reissner and presented in both Dolby and DTS 5.1 Surround Sound, as well as stereo, "Live Underground 2002" is a high-energy full-sensory experience that truly puts you right in the center of the action. Only 1,000 copies of this DVD were produced in the initial 2003 press run. Most were sold back then at shows and via mail order. The copies on sale here were recovered from a warehouse shipment that was presumed lost years ago. EXTREMELY LIMITED QUANTITY!!

More merch from Comes With The Fall